A narrative by Jeff Sutton from Harmony Medical

But this will be the 18th or 19th year at Horning’s Hideout for me—they really have flown by! So many different memories around my attending and volunteering there it’s hard to put it all into words. It’s mostly feelings, emotions and gratitude.

A significant portion of my life has been dedicated to events and medicine, and it all started at Horning’s, back when Cheese and Strummit both ran the hilltop and both cultures seemed to blend into each other.

Obviously, things have changed quite a bit. But don’t they everywhere?

“Back in the day” you could show up on Thursday afternoon and no one was really onsite yet. Guido was blasting Slayer over the sound systems as a test—you could count on that shit!

Strummit was in June many times, and it would rain tiny rivers under your tent, but only tiny rivers, if you were lucky.

The trees were only so tall and Bob was still developing the property. The mill was always there, up by where there are porta pots at the top of the hill. BUT MY GOD WAS IT DUSTY!

When we’d arrive onsite, I’d check in with Pat McCarville, and we’d say, “Hey what’s up with our spots?” and he’d reply, “Well it’s an Oklahoma landgrab!” So off we went to kick Rogue Beer out of our medical area! EVERY YEAR!

As the weekend goes by, you begin to see familiar faces in the same spaces. Westyville, the dirt slide, the secret hidden golf cart path with a moon crater in the middle that you must build a human train trestle in order to get across somehow. AND BUBBLES!!!

People almost get pissed if you don’t come by on a perimeter check in a medical golf cart and say “wassupppp” in the back 40. 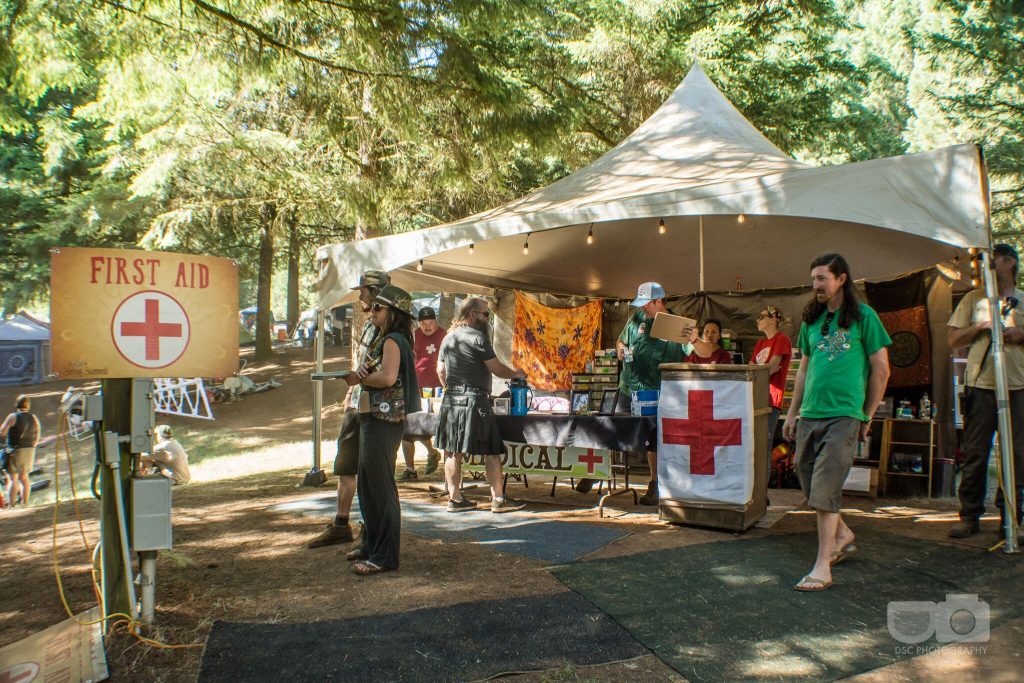 To Melinda, you can yell at us anytime for kicking up too much dust. it’s okay, we know you care deeply. To Coco, you’ve always supported us with kind words and gestures, thank you. Skye and Greg, dammit, me and Nathan are coming out to Colorado and we’re gonna have some fun!

And to that time we found a bunch of illicit substances and dumped it in the porta pot, then looked at each other and realized what we had done. That’s when I knew we had grown up at Horning’s.

We use cookies on our website to give you the most relevant experience by remembering your preferences and repeat visits. By clicking “Accept All”, you consent to the use of ALL the cookies. However, you may visit "Cookie Settings" to provide a controlled consent.
Cookie SettingsAccept All
Manage consent

This website uses cookies to improve your experience while you navigate through the website. Out of these, the cookies that are categorized as necessary are stored on your browser as they are essential for the working of basic functionalities of the website. We also use third-party cookies that help us analyze and understand how you use this website. These cookies will be stored in your browser only with your consent. You also have the option to opt-out of these cookies. But opting out of some of these cookies may affect your browsing experience.
Necessary Always Enabled
Necessary cookies are absolutely essential for the website to function properly. These cookies ensure basic functionalities and security features of the website, anonymously.
Functional
Functional cookies help to perform certain functionalities like sharing the content of the website on social media platforms, collect feedbacks, and other third-party features.
Performance
Performance cookies are used to understand and analyze the key performance indexes of the website which helps in delivering a better user experience for the visitors.
Analytics
Analytical cookies are used to understand how visitors interact with the website. These cookies help provide information on metrics the number of visitors, bounce rate, traffic source, etc.
Advertisement
Advertisement cookies are used to provide visitors with relevant ads and marketing campaigns. These cookies track visitors across websites and collect information to provide customized ads.
Others
Other uncategorized cookies are those that are being analyzed and have not been classified into a category as yet.
SAVE & ACCEPT