As told by Kristin Trippe, a long-time attendee and ambassador but most importantly, Lilli’s mom

Lilli was diagnosed with cancer on a Monday. She was 8-months old and had only recently began to crawl around our home in Kings Valley, Oregon. The night of her diagnosis, Aaron and I laid awake nervously in the hospital room, moving between disbelief and terror for the unknown, waiting for the morning to bring a more definitive diagnosis and any sign of hope. 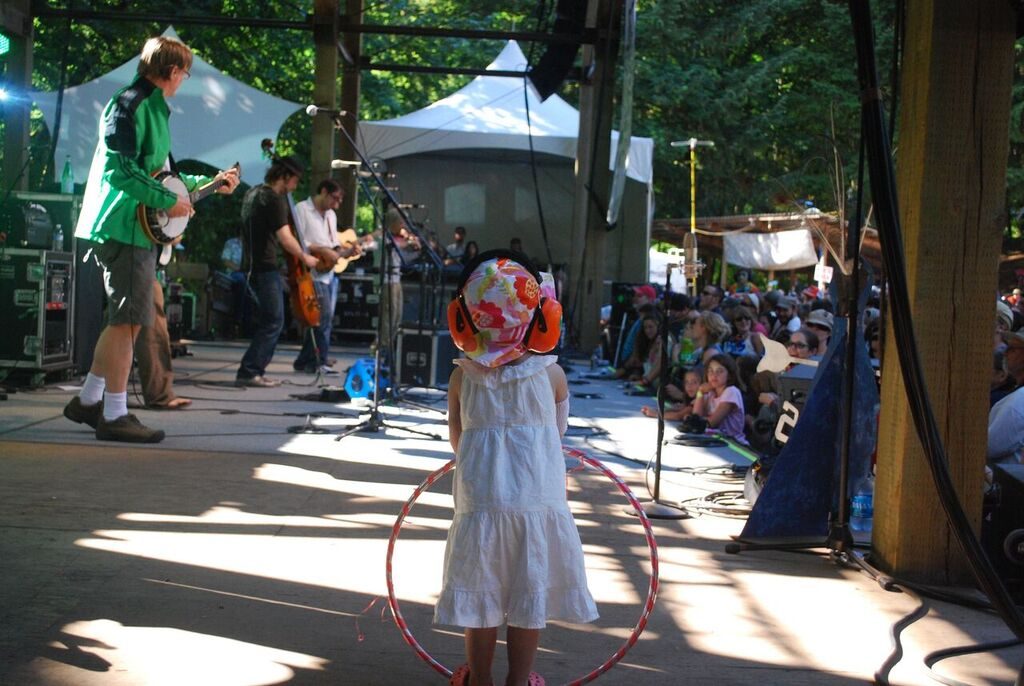 As we waited, I opened up my email, and immediately received my daily digest from the Yonder Mountain Kinfolk Yahoo group. Before social media, the Kinfolk group lived in the land of Yahoo, exchanging emails about everything Yonder (and non-Yonder) related. And I was a serious lurker. I rarely posted or responded, but was instead content to listen in on the daily chatter.  That morning, I sent an email to the group that was simply entitled “good vibes needed”. I had no idea how many good vibes would come.

Good vibes came from all corners of the world, but mostly, they came from Kinfolk. Almost immediately after sending the initial call for prayers, messages of support arrived in my inbox from Jeff Austin and from Jeff’s mom. And then, beautiful things started to happen.

Somehow, that summer, between month long hospital stays, we wrangled permission from Lilli’s oncologist to attend String Summit. It was our sixth Summit, and our first with Lilli. That String Summit was the moment that Lilli fell deeply in love with Yonder Mountain String Band and the magic of Horning’s Hideout. She danced, she played, she sang, and she celebrated her 1st birthday. She met the boys from Yonder and Pastor Tim, and so many of our lifelong Kinfolk family. And they embraced her. It was the first time, I think, that Jeff dedicated a song to Lilli, and the crowd gave her an enormous cheer.

Lilli’s story was extensively chronicled on her online journal, so I won’t try to tell it here. But in the Winter of 2010, after a bone marrow transplant and remission and relapse, she became critically ill. In January, Lilli died twice. Both times she returned, but was progressively worse for the wear. In the ICU, Aaron and I would play her songs she loved…all of them were by Yonder. Specifically, we would play old recordings of Darling One and Oh La La. Two song playlists that would hover on repeat for hours on end.

I can’t explain the power of music if you haven’t experienced it. I remember the harpist coming to our room plucking the strings to the tempo of Lilli’s heart rate. As the harpist would slow the tempo, Lilli’s heart rate would move with the beat. Eventually moving to normal. Darling One and Oh La La had the same effect. They brought a calm that pharmaceuticals couldn’t. After a dedication to Lilli on NYE, I reached out to Jeff and told him that the energy from those songs and from the crowd was transcending the medicine. Then the band started doing something magical. Every night, Yonder would stop the show and ask the crowd to send love to Lilli. To take some of that magical musical energy and put it in a bubble. And then they sent that bubble to us. This metaphorical, but palpable energy kept us going and more importantly, kept Lilli going. In my heart, I know it kept her alive.

That magic, that energy, is Kinfolk. Our family, our Lilli, used that Kinfolk magic to heal. Friends started sending out bracelets that read “Hope for Lilli”. The band wore them, thousands of Kinfolk wore them, Lilli’s bone marrow donor wore one, too. Kinfolk sent Lilli cards, and toys, and Pez dispensers, and recordings of shows, and most of all, they continued to send her their magical, endless hope.  And the coming together demonstrated that together, we CAN do great things.

So, in Lilli’s name, Kinfolk did great things. In 2010, Pastor Tim shaved his head and raised money for Childhood Cancer Research. Then Peggy Davis did it. Collectively, they raised nearly $10K. Scotty Lobear planned the biggest shave yet, scheduled for July 2011 at String Summit. It was beautiful and meaningful. It was a manifestation of the Kinfolk spirit.

But magic can only work so many miracles. In July 2011, just a few weeks before Scotty’s shave. Lilli died. But what didn’t die was Kinfolk. Kinfolk Family, Kinfolk Magic, Kinfolk Love all endured. To remember Lilli, Kinfolk decided to get “Frilly for Lilli” at String Summit. To have everyone dress in pink to celebrate the playful, beautiful spirit that Kinfolk kept alive. And dress in pink the Kinfolk did. The security crew dressed in pink. The band wore tutus. Scotty shaved his head. And it was beautiful and magical, and even though Lilli wasn’t there, she was.

For the last eight years, Kinfolk still dress in pink on String Summit Sunday. And we still shave heads to raise money to help kiddos with cancer. We do it to remember Lilli, but we also do it to remind ourselves that together, we do beautiful things; that Kinfolk is more than just loving a band and loving the music. It’s loving each other.

We use cookies on our website to give you the most relevant experience by remembering your preferences and repeat visits. By clicking “Accept All”, you consent to the use of ALL the cookies. However, you may visit "Cookie Settings" to provide a controlled consent.
Cookie SettingsAccept All
Manage consent

This website uses cookies to improve your experience while you navigate through the website. Out of these, the cookies that are categorized as necessary are stored on your browser as they are essential for the working of basic functionalities of the website. We also use third-party cookies that help us analyze and understand how you use this website. These cookies will be stored in your browser only with your consent. You also have the option to opt-out of these cookies. But opting out of some of these cookies may affect your browsing experience.
Necessary Always Enabled
Necessary cookies are absolutely essential for the website to function properly. These cookies ensure basic functionalities and security features of the website, anonymously.
Functional
Functional cookies help to perform certain functionalities like sharing the content of the website on social media platforms, collect feedbacks, and other third-party features.
Performance
Performance cookies are used to understand and analyze the key performance indexes of the website which helps in delivering a better user experience for the visitors.
Analytics
Analytical cookies are used to understand how visitors interact with the website. These cookies help provide information on metrics the number of visitors, bounce rate, traffic source, etc.
Advertisement
Advertisement cookies are used to provide visitors with relevant ads and marketing campaigns. These cookies track visitors across websites and collect information to provide customized ads.
Others
Other uncategorized cookies are those that are being analyzed and have not been classified into a category as yet.
SAVE & ACCEPT